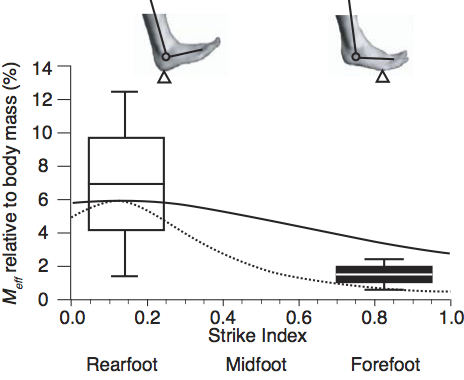 The collision at the foot generates a force more than twice the body weight. With more than 500 foot strikes per kilometer, these impacts are postulated to be a major contributor to running injuries that afflict over 30% of endurance runners. But, how did humans run safely before the invention of the modern cushioned running shoe in the 1970s? By comparing habitually barefoot versus habitually shod endurance runners from the USA and also from the Nandi district in Kenya (famous for its endurance runners), we found that the collisional impulse for barefoot runners was four to seven times smaller than for shoe-wearing runners. Using a mathematical model of the collisional mechanics for a runner, we show that foot impacts in the barefoot runners were smaller because they first land on their forefoot (ball of their feet), and also maintain lower ankle stiffness than heel strikers. This study has prompted an investigation in my group, and others, on the role of compliance in the leg and the foot for stability on rough terrains. Besides implications for the shoe industry, our work affects future studies on the biomechanics of human running, and raises questions about the role of feet in humans, animals, robots and prostheses.

Related ongoing projects in the lab include: 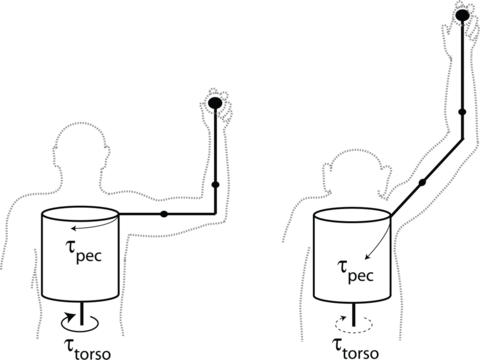 We found clear evidence for the role of elasticity in high speed throwing. Some primates, including chimpanzees, occasionally throw objects such as rocks, but only humans routinely throw with high speed and accuracy. Are there morphological features that underlie the superior throwing ability of humans? We used experimental studies of humans throwing projectiles, and mechanical estimates of power output at joints to show that our throwing capabilities largely result from anatomical features that enable elastic energy storage and release at the shoulder. We hypothesized that elastic energy storage is central to human throwing, and designed an experiment to quantify elastic energy storage. By providing clear evidence for elastic energy storage in the shoulder, this study has helped researchers interested in shoulder injuries to focus on specific musculoskeletal elements.

Using our fingers, we routinely touch, press and interact with external surfaces. These interactions couple the dynamics of the finger to the object or surface being touched, and creates challenging problems for control of robotic grasping. However, the strategies that humans use in fingertip contact control was unknown prior to our studies. Using fine-wire electromyograms from all seven muscles of the index finger and biomechanical modeling, we showed that when transitioning between motion and force (finger tapping) humans precisely anticipate fingertip collisions. The torques at the finger joints rapidly switch from motion to force control just in time (< 60ms) for contact. Then using optimal control we showed that elasticity of the long tendons of the fingers, the time constant for neural excitation of muscle and frictional constraints at the fingertip are the primary mechanical and neuromuscular factors that govern the observed strategy. Our investigations into contact control by humans drives my current work on muscle mechanics, and a broader theory for systematic actuator and mechanical design.

Humans appear noisy in their motor capabilities, but are not uniformly so. There is emerging evidence of underlying structure to this noise. Humans exhibit lesser variability in parameters that directly affect the outcome of the task than in task-irrelevant parameters. Can the nervous system directly alter the covariance of motor noise across multiple muscles? Until our study, it was not possible to rule out other factors such as task mechanics and fatigue driven trial-to-trial variability. Using fine-wire electromyograms recorded from all muscles of the index finger, for a static finger pressing task, we found that there is indeed neurally modulated structure to the variability of muscle output. Muscle combinations that contributed to the instructed force direction had lesser variability than those that did not. For both machines and humans, open questions remain on whether reducing variability in actuation comes at a cost, energetic, performance or otherwise. In tasks that involve working near boundaries of instability, actuator noise can play a key role in monitoring whether the system is close to failure or not. Noise reduction is therefore not always beneficial.

Our hands are capable of lot more than static grasping. Dexterous manipulation, involving the precise regulation of the fingers, is a skilled activity that we use everyday. Such manipulation is a combination of predictive control strategies and feedback from multiple sensors such as vision, touch and proprioception. How do humans use potentially redundant information from multiple sensors? Using an experimental task, of compressing slender springs prone to buckling, we showed how humans combine feedback from multiple sensors in a context sensitive manner. Vision, the slowest of the available sensory modalities, was almost unused when tactile information was reliable. But, when the quality of tactile sensation was experimentally degraded, vision became the dominant mode of feedback despite having larger time delays than proprioception. We developed a reduced order model for this dynamic manipulation task, and found that the globally optimal strategy for sensor fusion resembled what humans use. This work led to a clinical tool for quantifying hand function, as well as a functional MRI study to identify the neural correlates of strength and dexterity. Fundamental questions remain on how the nervous system learns to control objects with many internal degrees of freedom, and whether techniques of bifurcation detection that are employed by engineers (such as in electrical power grids) have a role to play in neural and robotic control near stability boundaries.